Fundamentals of the Probability of Default (PD) Model is a statistical model that produces a PD, which is trained using default indicators and incorporates both financial and business risk. Available through our Credit Analytics desktop solution, API and data feeds, PD Model Fundamentals (PDFN) includes a pre-scored universe of over nine million public and private companies extracted from the S&P Global Market Intelligence database, representing 99% of the global market capitalization.

The PDFN score showed a struggling outlook for Christopher & Banks even before the pandemic at over 30% (implied credit score of “ccc-”) compared to the country/industry median of 3% (see Figure 1).[1] This is largely because Christopher & Banks became unprofitable a few years before the pandemic and the crisis exacerbated its already weakened position. 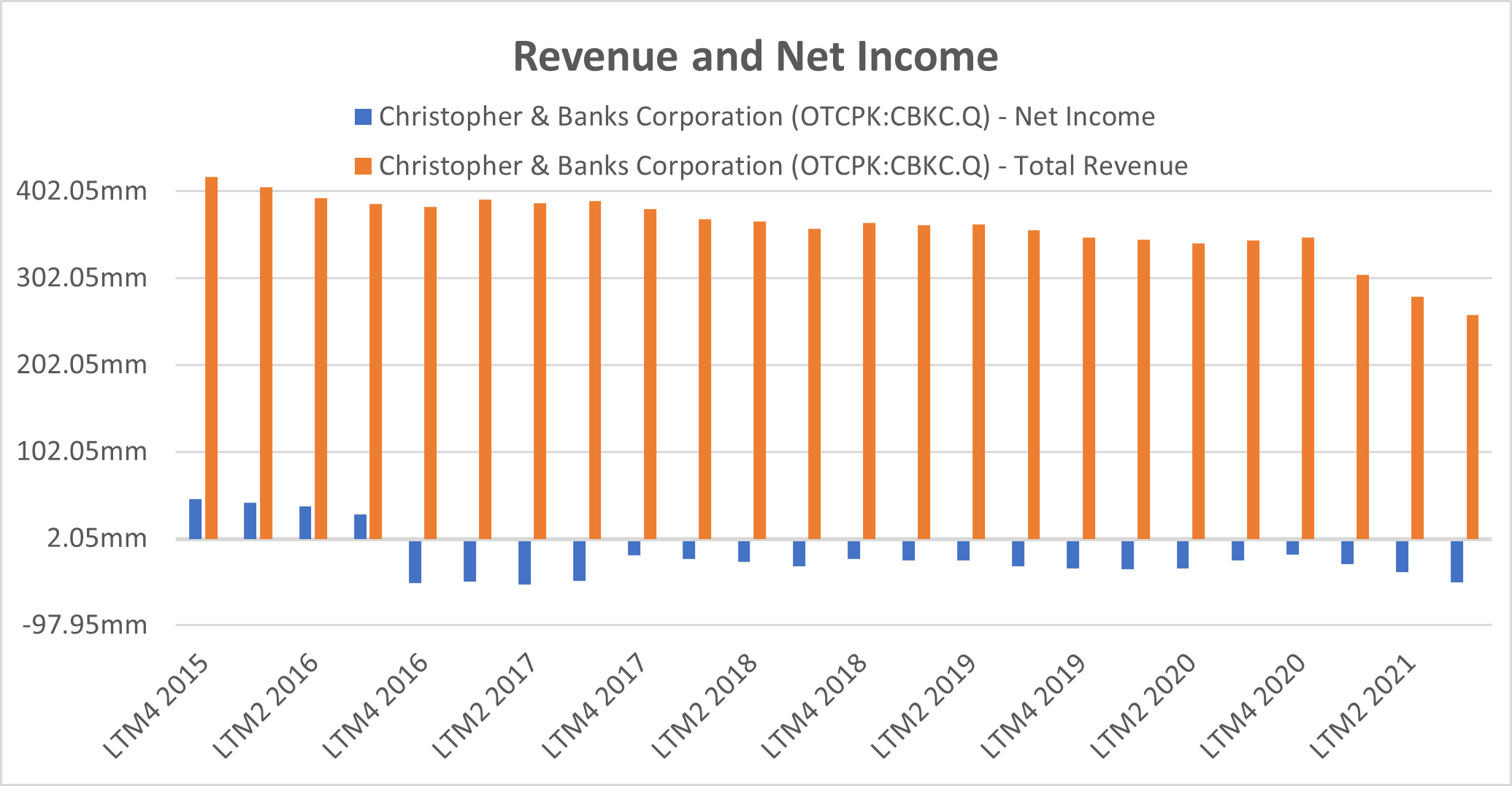 Declining sales, driven by a competitive apparel retail environment, and operational inefficiencies coupled with higher costs have turned a highly profitable business into a loss-making machine.

Christopher & Banks has shown weaker financials every year, with declining sales and consistent losses with an average loss of $31 million per year, implying higher business risk and higher PD, represented by the increasing PDFN score.

As the COVID-19 pandemic swept the world in early 2020, many street retail businesses found themselves vulnerable. Forced to close its stores, Christopher & Banks’ revenues plummeted.

After the company announced its results for the first quarter of 2020, the PDFN score jumped significantly from 33.62% to 63.43% (implied credit score of “cc”).

The most important factors that impacted PD were total equity, profitability (EBIT margin) and liquidity (cash/current liabilities), indicating that the company had high business and financial risk factors.

As the pandemic forced the company to halt operations, company earnings fell more than 50% between FQ2020 and FQ2021, from $88M to $40M, with a subsequent drop of 41%, finally ending with a negative profit margin of -18.11%. As Christopher & Banks’ revenue growth slowed, the company went deeper and deeper into debt.

If you want to know how to track early warning signals of deteriorating credit quality, contact us here

In the aftermath of the pandemic, the Reserve Bank of India (RBI) has been at the forefront of stabilizing the financial system to keep liquidity in excess mode. The average net sustainable liquidity injected into the banking system since April 2021 is Rs9.3 lakh crore. However, excess liquidity creates credit risk for financial institutions, according […]